The simulation perspective adds on the user interface a number of new menus and commands (i.e. buttons) that are specific to experiment-related tasks.

A menu, called "Experiment", allows controlling the current experiment. It shares some of its commands with the general toolbar (see below).

A second menu is added in the simulation perspective: "Agents". This menu allows for easy access to the different agents that populate an experiment. 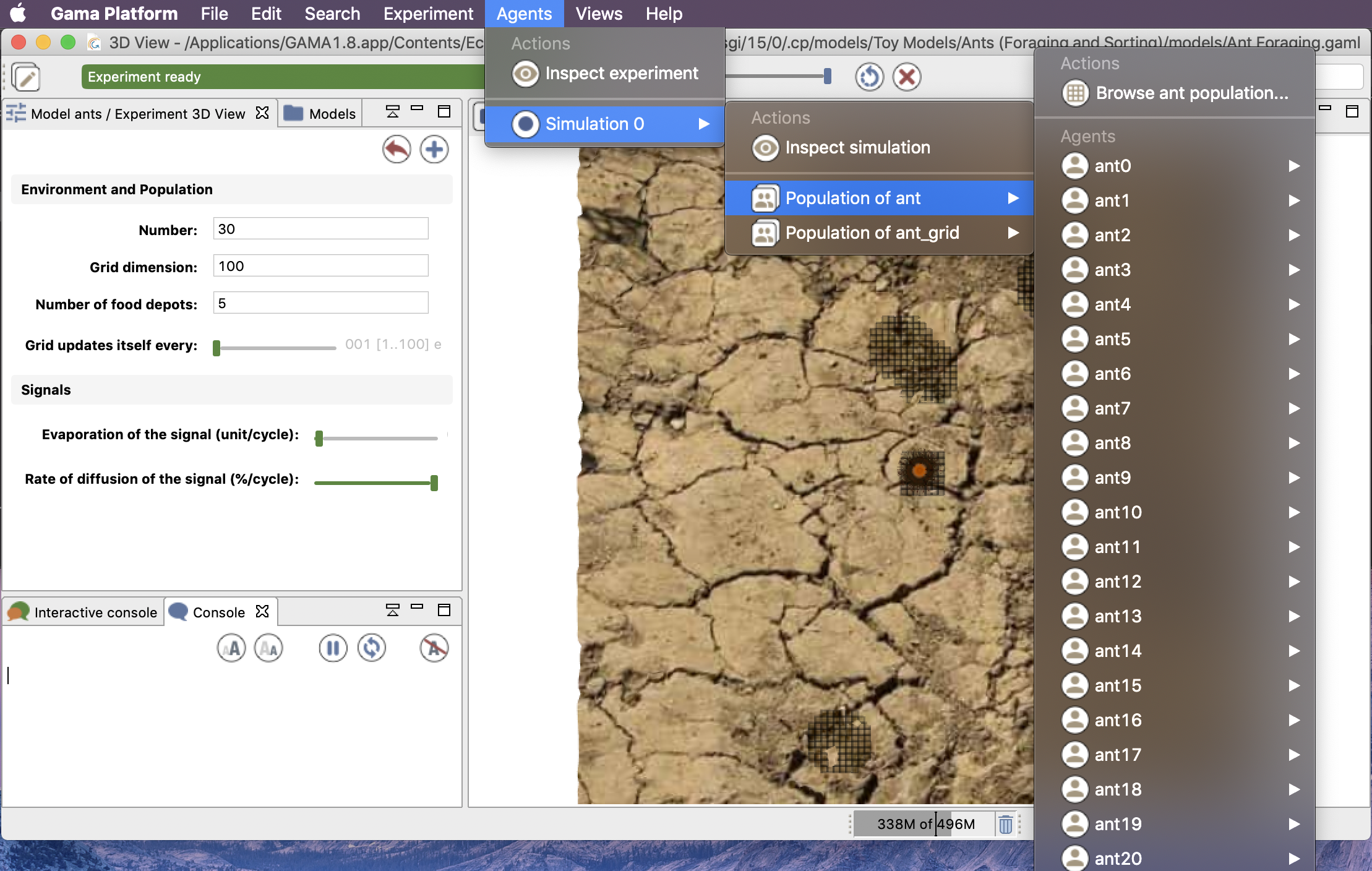 This hierarchical menu is always organized in the same way, whatever the experiment being run. A first level is dedicated to the current top-level experiment agent: it allows the modeler to inspect the agent itself and to browse its population(s) (i.e. the simulation agents). A second level lists the "micro-populations" present in each simulation agent and allows to inspect the agent itself. And the third level will give access to an overview of all the agents of the population in a table ("Browse ant population...") and to each individual agent in these populations. This organization is, of course, recursive: if these agents are themselves, hosts of micro-populations, they will be displayed in their individual menu.

Each agent, when selected, will reveal a similar individual menu. This menu will contain a set of predefined actions, the commands defined by the user for this species if any, and then the micro-populations hosted by this agent, if any. Agents (like the instances of "ant" below) that do not host other agents and whose species has no user commands will have a "simple" individual menu.

These are the 4 actions that will be there most of the time:

If an agent hosts other agents (it is the case in multi-level architecture), you can access to the micro-population quite easily (e.g. in the model Library models/Modeling/Multi-Level Usage/Corridor.gaml):

The last piece of user interface specific to the Simulation Perspective is a toolbar, which contains controls and information displays related to the current experiment.

This toolbar is voluntarily minimalist, with four buttons already present in the experiment menu (namely, "Play/Pause Experiment", "Step Experiment", "Reload Experiment" and "Close Experiment"), which do not need to be detailed here, and two new controls ("Experiment status" and "Cycle Delay"), which are explained below.

While opening an experiment, the status will display some information about what's going on. For instance, GAMA is busy instantiating the agents or opening the displays.

Hovering over the status produces more accurate information about the internal clock of the simulation.

In the case of a multi-simulation (i.e. an experiment launching several simulations), one block per simulation is displayed. 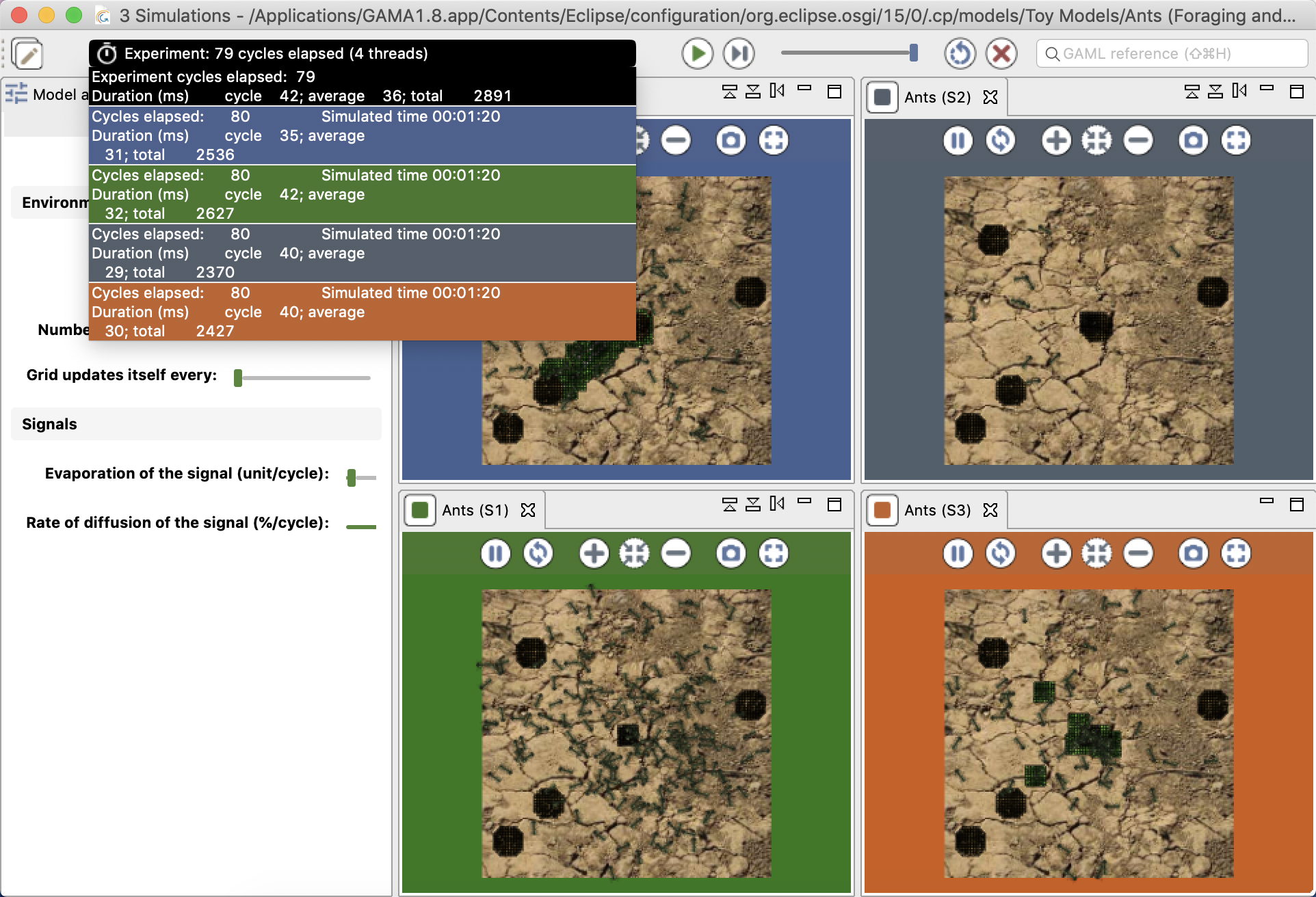 Although these durations are entirely dependent on the speed of the simulation engine (and, of course, the number of agents, their behaviors, etc.), there is a way to control it partially with the second control, which allows the user to force a minimal duration (in milliseconds) for a cycle, from 0s (its initial position) to 1s. Note that this minimal duration (or delay) will remain the same for the subsequent reloads of the experiment.

In case it is necessary to have more than 1s of delay, it has to be defined, instead, as an attribute of the experiment.