A grid is a particular species of agents. Indeed, a grid is a set of agents that share a grid topology (until now, we only saw species with continuous topology). Like other agents, a grid species can have attributes, attributes, behaviors, aspects. However, contrary to regular species, grid agents are created automatically at the beginning of the simulation. It is thus not necessary to use the create statement to create them. Moreover, in addition to classic built-in variables, grid comes with a set of additional built-in variables.

Instead of using the species keyword, use the keyword grid to declare a grid species. The grid species has exactly the same facets as the regular species, plus some others. To declare a grid, you can specify the number of columns and rows first (another possibility to declare the grid is detailed below when (we create a grid from a matrix)[GridSpecies#grid-from-a-matrix]). You can do it in two different ways:

Another facet exists for grid only, very useful. It is the neighbors facet, used to determine how many neighbors each cell has. You can choose among 3 values: 4 (Von Neumann), 6 (hexagon) or 8 (Moore).

A grid can also be provided with specific facets that allow to optimize the computation time and the memory space, such as use_regular_agents, use_indivitual_shapes and use_neighbors_cache. Please refer to the GAML Reference for more explanation about those particular facets.

This variable stores the column index of a cell.

This variable stores the row index of a cell.

The color built-in variable is used by the optimized grid display. Indeed, it is possible to use for grid agents an optimized aspect by using in a display the grid keyword. In this case, the grid will be displayed using the color defined by the color variable. The border of the cells can be displayed with a specific color by using the lines facet.

Here an example of the display of a grid species named cell with black border.

The neighbors built-in variable returns the list of cells at a distance of 1. This list obviously depends on the neighbor type defined in the grid statement (4,6, or 8).

The grid_value built-in variable is used when initializing a grid from grid file (see later). It contains the value stored in the data file for the associated cell. It is also used for the 3D representation of DEM.

Information that is commonly asked a cell agent is the set of agents located inside it. This information is not stored in the agent, but can be computed using the inside operator:

There are several ways to access a specific cell:

You can easily display your grid in your experiment as followed:

The grid will be displayed, using the color you defined for each cell (with the color built-in attribute). You can also show the border of each cell by using the facet lines and choosing a color:

Beware: do not use this second display when you have large grids: it is much slower.

Grid from a matrix

An easy way to load some values in a grid is to use matrix data. A matrix is a type of container (we invite you to learn some more about this useful type here). Once you have declared your matrix, you can set the values of your cells using the ask statement :

Declaring larger matrix in GAML can be boring as you can imagine. You can load your matrix directly from a csv file with the operator matrix (used for the contruction of the matrix).

You can try to read the following csv :

With the following model:

For more complicated models, you can read some other files, such as ASCII files (asc), DEM files. In this case, the creation of the grid is even easier as the dimensions of the grid can be read from the file with the file facet:

To practice a bit those notions, we will build a quick model. A "regular" species will move randomly on the environment. A grid is displayed, and its cells becomes red when an instance of the regular species is waking inside this cell, and yellow when the regular agent is in the surrounding of this cell. If no regular agent is on the surrounding, the cell turns green. 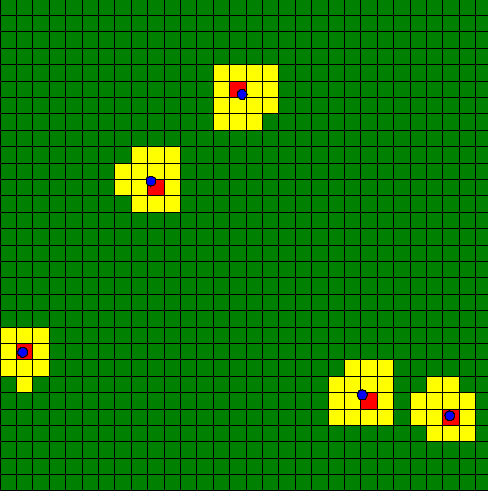 Here is an example of implementation: