The multi-level architecture offers the modeler the following possibilities: the declaration of a species as a micro-species of another species, the representation of an entity as different types of agent (i.e., GAML species), the dynamic migration of agents between populations.

A species can have other species as micro-species. The micro-species of a species is declared inside the species' declaration.

To access micro-agents (from a macro-agent), and to host agent (from a micro-agents), you have to use two built-in attributes.

The members built-in attribute is used inside the macro-agent, to get the list of all its micro-agents.

The host built-in attribute is used inside a micro-agent to get its host macro-agent.

Representation of an entity as different types of agent​

The multi-level architecture is often used in order to represent an entity through different types of agent. For example, an agent "bee" can have a behavior when it is alone, but when the agent is near from a lot of agents, he can changes his type to "bee_in_swarm", defined as a micro-species agent of a macro-species "swarm" agent. Another example: an agent "pedestrian" can have a certain behavior when walking on the street, and then change his type to "pedestrian_in_building" when he is in a macro-agent "building".

You have then to distinguish two different species to define your micro-species:

In our example about bees, a "swarm" entity is composed of nearby flying "bee" entities. When a "bee" entity approaches a "swarm" entity, this "bee" entity will become a member of the group. To represent this, the modeler lets the "bee" agent change its species to "bee_in_swarm" species. The "bee" agent hence becomes a "bee_in_swarm" agent. To change species of an agent, we can use one of the following statements: capture, release, migrate.

Here is an example of micro_species that gather together in macro_species when they are close enough. 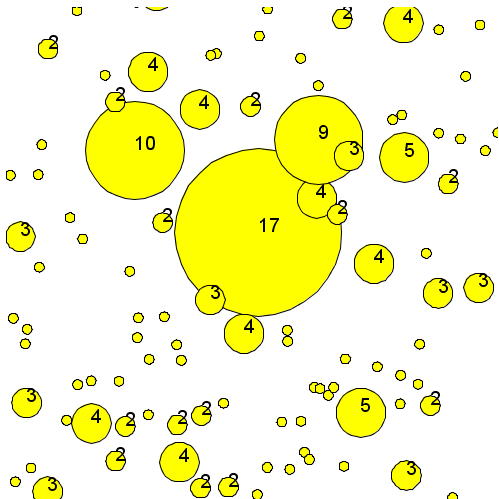