ODEs (Ordinary Differential Equations) are often used in ecology or in epidemiology to describe the macroscopic evolution over time of a population. Generally, the whole population is split into several compartments. The state of the population is described by the number of individuals in each compartment. Each equation of the ODE system describes the evolution of the number of individual in a compartment. In such an approach individuals are not taken into account individually, with own features and behaviors. On the contrary, they are aggregated in a compartment and reduced to a number.

A classical example is the SIR epidemic model representing the spreading of a disease in a population. The population is split into 3 compartments: S (Susceptible), I (Infected), R (Recovered). (see below for the equation)

In general, the ODE systems cannot be analytically solved, i.e. it is not possible to find the equation describing the evolution of the number of S, I or R. But these systems can be numerically integrated to get the evolution. A numerical integration computes step after step the value of S, I and R. Several integration methods exist (e.g. Euler, Runge-Kutta...), each of them being a compromise between accuracy and computation time. The length of the integration step has also a huge impact on precision. These models are deterministic.

This approach makes a lot of strong hypotheses. The model does not take into account space. The population is considered as infinite and homogeneously mixed so that any agent can interact with any other one.

Example of a SIR model​

In the SIR model, the population is split into 3 compartments: S (Susceptible), I (Infected), R (Recovered). This can be represented by the following Forrester diagram: boxes represent stocks (i.e. compartments) and arrows are flows. Arrows hold the rate of a compartment population flowing to another compartment.

The corresponding ODE system contains one equation per stock. For example, the I compartment evolution is influenced by an inner (so positive) flow from the S compartment and an outer (so negative) flow to the R compartment.

Integrating this system using the Runge-Kutta 4 method provides the evolution of S, I and R over time. The initial values are:

Why and when can we use ODE in agent-based models?​

These hypotheses are very strong and cannot be fulfilled in agent-based models.

But in some multi-scale models, some entities can be close. For example, if we want to implement a model describing the worldwide epidemic spread and the impact of air traffic on it, we cannot simulate the 7 billion people. But we can represent only cities with airports and airplanes as agents. In this case, cities are entities with a population of millions of inhabitants, that will not be spatially located. As we are only interested in the disease spread, we are only interested in the number of infected people in the cities (and susceptibles and recovered too). As a consequence, it appears particularly relevant to describe the evolution of the disease in the city using an ODE system.

In addition, these models have the advantage to not be sensible to population size in the integration process. Dozens of billions of people do not bring a computation time increase, contrarily to agent-based models.

Use of ODE in a GAML model​

Note: the t attribute will be automatically updated using the solve statement; it contains the time elapsed in the equation integration.

In order to ease the use of very classical ODE system, some built-in systems have been implemented in GAMA. For example, the previous SI system can be written as follows. Three additional facets are used to define the system:

Split a system into several agents​

Details about the solve statement​

Integration method with the method facet​

Several integration methods can be used in the method facet. Here are the 3 most common ones:

GAMA relies on the Apache Commons Math library to solve the equations; it thus provides access to the various solvers integrated into the library. The list of all the solver is detailed in this page, section 15.4 Available integrators. The GAML constants associated with each of them (to use in the method statement) are:

In order to improve the precision of the integration or its speed, the integration step can be set using the step_size facet. Its default value is 1, but classical use is to set it to 0.01.

This value is very important in some solvers, the Fixed Step Integrators, that keep the same integration step value all over the integration. One drawback is that the integration does not require the same precision all over its computation: a high precision is needed in part with a lot of variations, whereas in a quite stable part a low precision could be enough. The interest of the Adaptive Stepsize Integrators (e.g. #dp853) is that their integration step is not constant. Such integrators require thus more information, through the following mandatory facets:

Synchronization between simulation and integration​

In one simulation step, if the statement resolve is called one time, several integration steps will be done internally. If we want to get the intermediate computation results, we can use the notation: var[] that returns the list of intermediate values of the variable var involved in an equation. As an example, with a SIR equation:

Example of the influence of the integration step​

The step (of the global) and step_size (of solve) facets may have a huge influence on the results. step_size has an impact on the result accuracy. In addition, as mentioned previously, simulation and integration steps are synchronized: altering the step value, impact the integration. 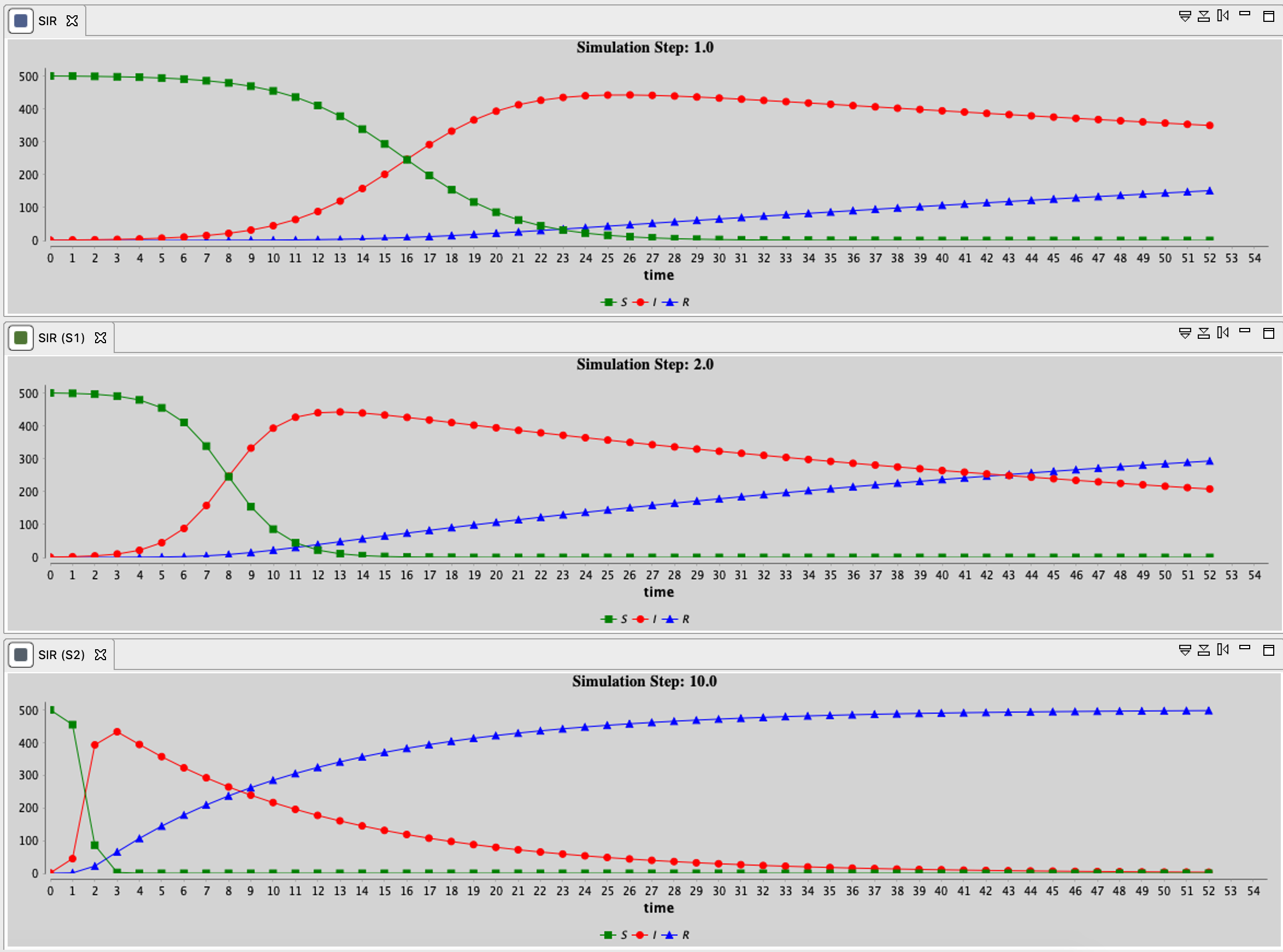 Several built-in equations have been defined.