This second step model adds the moving3D skill to the cell agents and simply makes the cell agents move by defining a reflex that will call the action move. We will also add additional visual information to the display. 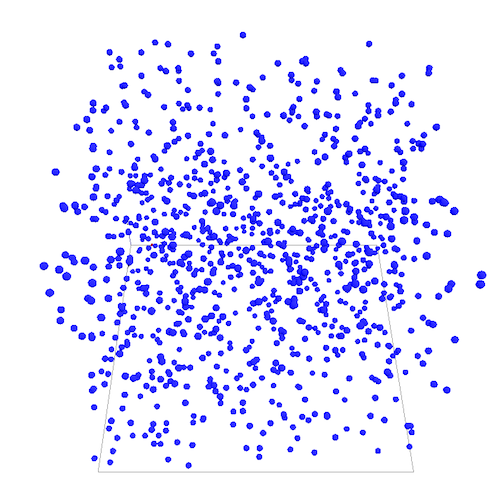 We use a new global variable called environment_size to define the size of our 3D environment. In the global section, we define the new variable:

When we created the cell agents, we want to place them randomly in the 3D environment. To do so we set the location with a random value for x, y and z between 0 and environment_size.

In the previous example, we only created cell agents that did not have any behavior. In this step we want to make them move. To do so we add a moving3D skill to the cell species.

More information on built-in skills proposed by GAMA can be found here.

Then we define a new reflex for the species cell that consists in calling the action move bundled in moving3D skill.

Finally we modify a bit the aspect of the sphere to set its size according to the environment_size global variable previously defined.

The experiment is the same as the previous one except that we will display the bounds of the environment by using a graphics layer.