This page aims at presenting how to use the advanced driving skill in models.

The use of the advanced driving skill requires to use 3 skills:

Structure of the network: road and road_node skills​

The advanced driving skill is versatile enough to be usable with most of classic road GIS data, in particular, OSM data. We use a classic format for the roads and nodes. Each road is a polyline composed of road sections (segments). Each road has a target node and a source node. Each node knows all its input and output roads. A road is considered as directed. For bidirectional roads, 2 roads have to be defined corresponding to both directions. Each road will be the linked_road of the other. Note that for some GIS data, only one road is defined for bidirectional roads, and the nodes are not explicitly defined. In this case, it is very easy, using the GAML language, to create the reverse roads and the corresponding nodes (it only requires a few lines of GAML). 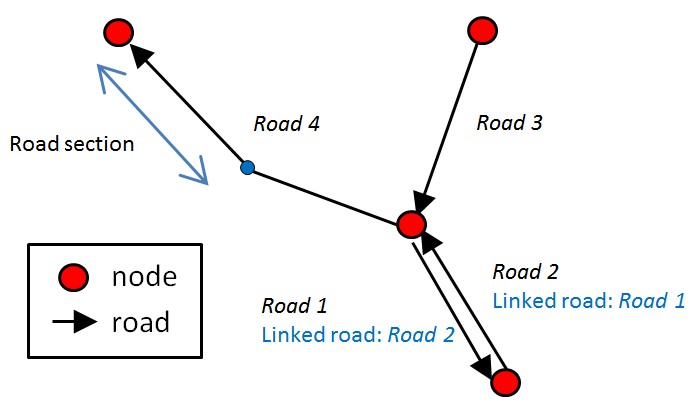 A road can be composed of several lanes and the vehicles will be able to change at any time its lane. What a lane represents will depend a lot on the context of application. Typically, if in developed countries, the lanes are most of times well defined, in many other countries this notion is much more abstract. For example in Vietnam where the main means of locomotion is the motorcycle, a lane can designate a "place" for a motorcycle and thus be much narrower than classical lanes. Another property of the road that will be taken into account is the maximal authorized speed on it. Note that even if the user of the plug-in has no information about these values for some of the roads (the OSM data are often incomplete), it is very easy using the GAML language to fill the missing value by a default value. It is also possible to change these values dynamically during the simulation (for example, to take into account that after an accident, a lane of a road is closed or that the speed of a road is decreased by the authorities).

The road skill (skill_road) provides the road agents with several variables that will define the road properties:

It provides as well the road agents with read-only variables:

It provides as well the road agents with one read-only variable:

A vehicle is first characterized by its location, a 3D-point (coordinate) that represents the centroid of the vehicle. The actual geometry of the vehicle is not taken into account. However, the size of a vehicle is determined by two attributes: vehicle_length and num_lanes_occupied. Indeed, if we go back to our Vietnamese example where the lanes are defined according to the size of the motorcycles, we can consider that a motorcycle will occupy one lane, but that a car, which is much wider, will occupy two.

Each vehicle agent has also a planned trajectory that consists of a succession of edges. When the vehicle agent enters a new edge, it first chooses its lane according to the traffic density, with a bias for the rightmost lane. The movement on an edge is inspired by the Intelligent Driver Model. The drivers have the possibility to change their lane at any time (and not only when entering a new edge). The lane-changing model is inspired from the MOBIL model.

The advanced driving skill (advanced_driving ) provides the driver agents with several variables that will define the car properties and the personality of the driver:

It provides as well the driver agents with several read-only variables:

Of course, the values of these variables can be modified at any time during the simulation. For example, the probability to take a reverse road (proba_use_linked_road) can be increased if the driver is stuck for several minutes behind a slow vehicle.

The drive action works as follow: while the agent has the time to move (remaining_time > 0), it first defines the speed expected. This speed is computed from the max_speed of the road, the current real_speed, the max_speed, the max_acceleration and the speed_coef of the driver.

Then, the agent moves toward the current target and compute the remaining time. During the movement, the agents can change lanes. If the agent reaches its final target, it stops; if it reaches its current target (that is not the final target), it tests if it can cross the intersection to reach the next road of the current path. If it is possible, it defines its new target (target node of the next road) and continues to move.

More details about the driving skill can be found here